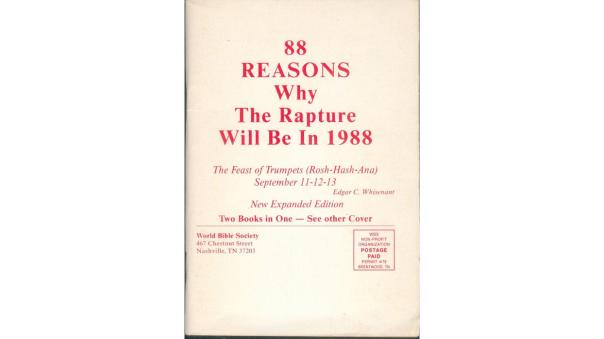 Younger Christians may not remember this, but 25 years ago, in 1988, millions of Bible-believing Christians all over the world were anxiously awaiting and breathlessly watching for that glorious event to take place, in which the hopes and dreams of generations of believers would be fully realized and instantly confirmed and consummated in the physical, earthly return of our Lord Jesus Christ at the moment of the “catching away” of His bride into the clouds of the air in a biblically predicted event known as “The Rapture.”

I was one of those anxiously awaiting, breathlessly watching Christians that year.

And when 1988 came and went, and I was still here — and Jesus wasn’t — I became even MORE anxious and breathless!

Talk about not getting what you wanted on Christmas morning.

Talk about disappointment and disillusionment.  Our Deliverer was a no-show.  And, here we all were — breathless, anxious and now demoralized Christians — still stuck in our day jobs, still stuck with the world’s problems to solve and Satan’s wickedness (and our own sinfulness) to contend with.

But the next 2-3 years were a time of transition and reexamination for me.  Reexamining my theology, my eschatology, and my underdeveloped biblical worldview.  Providentially, that was also the time during which I discovered R. J. Rushdoony, Dr. Gary North, Calvinism, the Reformed faith and Christian Reconstructionism.

The more I read and learned and developed my newly-emerging, Calvinist Christian Reconstructionist biblical worldview, the less relevant and less biblical I saw the doctrine of an imminent Rapture and imminent, literal, physical return of Jesus to set up his earthly, millennial Kingdom (with bureaucratic headquarters in Jerusalem) really was.

I moved on and left it behind.

Fast forward.  Yesterday, Gary North published an article asking the question: “Whatever Happened to the Rapture?”

That article commemorates the 25th anniversary of a debate Gary had, along with Gary DeMar, against Dave Hunt and Tommy Ice — two well-known figures in the world of evangelical pop prophecy and Dispensationalism during the 1980s — on the subject of Christian Reconstruction.

Earlier this year, North and DeMar sat down for a followup video discussion of that debate and of the debate that is still going on about what Christians should be doing in this world while Jesus reigns from heaven and before His return.

Their discussion is not even about eschatology per se– the last days and end times — as you might expect.  It is more about, as they emphatically point out, ETHICS and ACTION.  How Christians can and should be applying their faith in the various areas of education, politics, economics, religion and the family, etc..  Eschatology may have been the “hook” that North and DeMar used to launch and frame the debate, but it was never the crux or essence of it.

Their concern is and has always been about the practical application and implementation of the Christian faith, not theoretical, hermeneutic speculation and rhetorical argument.

The original debate is here:

The hair has changed. The issues have not!

2 thoughts on “Reconstructionism vs. Dispensationalism: 25 Years Later, the Debate Still Hinges on the Role and Responsibility of Christians, Not the Return of Jesus”