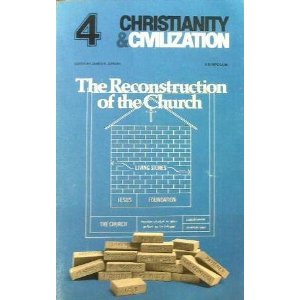 Looking for a good book on how to reform the church?  Here’s one to start with.  This is a 28-year old volume published (1985) by the old Geneva Ministries of Tyler, Texas, called The Reconstruction of the Church, part of a series called Christianity and Civilization. It was edited by James B. Jordan.

It is a symposium that was held on this topic, the fruits of which are this series of essays written by some of the leading figures in the early years of the Christian Reconstruction movement, dealing with the theme of the Church and its mission and role within the context of society and the modern culture.

The essays are provocative, illuminating, and really do represent the broad range of opinion that has always characterized the movement–no monolithic band of biblical ideologues, this bunch!

If you’re familiar with the work of most of these men, you know what gifted writers, teachers and thinkers they are.  And each of the chapters in this book is its own self-contained monograph on its respective topic.  Great reading!

The book is divided into four sections:

PART I: THE CHURCH IN DISARRAY

The essays all have intriguing titles like, “Church Music in Chaos,” “Clothing and Calling,” Culture, “Contextualization and the Kingdom of God.”   Some are historical: “Revivalism and American Protestantism,” “The Church in an Age of Democracy.”  Some are theological/expositional: “The Marriage Supper of the Lamb.”  And some are a whimsical allegory driving home a larger, powerful point: “Conversations with Nathan.”

The shared conviction of what this collection represents is best summed up in Jordan’s introduction, where he says that there are three principles (“pedagogies”) that need to be at the heart of any real reformation, beginning with the Church: true government (discipline/boundaries), true worship (sacramental liturgy/ritual) and true teaching (doctrine/instruction).

The perspective of the organizers of this symposium is that the reconstruction of the Church requires the reestablishment of all three of these pedagogies… When these things are recovered by the Church, since judgment begins at the house of God, they will also be recovered by society at large. The Church is the nursery of the Kingdom, and there can be no reformation in state, school, or family, until there is reformation in the Church.

Nothing in this book is pietistic, contemplative or introspective.  All of the essays are powerfully written, practical and forthright, with an appropriate mixture of humor with intense, relentless candor about the graveness and importunity of the subject at hand: the mission of the Church of Jesus Christ in the world to the unconverted and the lost, and the faithful advancement of God’s kingdom and God’s principles implemented in time and in history on earth.

In Part I, James B. Jordan addresses what he calls “the present mess” that he sees in the American Protestant church, with its “anti-ecclesiastical piety.”  Lewis E. Bulkeley talks about church renewal biblically applied to ailing congregations.  Peter J. Leithart discusses how revivalism, despite its positive impact, has undermined our biblical conception of the Church.

Part II is on church government.  Ray R. Sutton defines it and talks about its role in handling church schisms.  Gary North argues for preserving the integrity of the church through “two-tiered” membership.  Jim West talks about the role of excommunication as a curative tool for preserving the health of the ecclesiastical body.

Part III covers worship.  David Chilton crafts a witty and fictitious dialogue between himself and his young son, exposing the liturgical shortcomings and infelicities that he finds in a typical, contemporary American evangelical church service.  Ray R. Sutton discusses formality and informality in worship, and defends the argument for clerical garb as a biblically and historically warranted expression of the minister’s calling.  Gary North draws the theological-biblical parallel between the Lord’s Supper and the Marriage Supper of the Lamb.  James B. Jordan addresses what he terms “the abominable state of music in the church.”  And James M. Peters explores architecture, imagery and symbolism as it relates to liturgy and worship.

In Part IV, on the outward focus of the mission of the Church, George Grant defines biblical charity and what that should look like in the surrounding culture.  And, finally, Marion Luther McFarland posits a biblical-covenantal approach to transforming culture, “liberating” it through the Gospel and sound doctrine taught and applied, as opposed to the standard, theologically liberal way of “contextualizing” Christianity to fit its native, indigenous setting.

There’s something for everyone here–as long as “everyone” is interested in reconstructing and reforming the Church to the glory of God and in accordance with the Scriptures and historic, orthodox, biblical Christianity!

You can download and read this excellent book by clicking here.